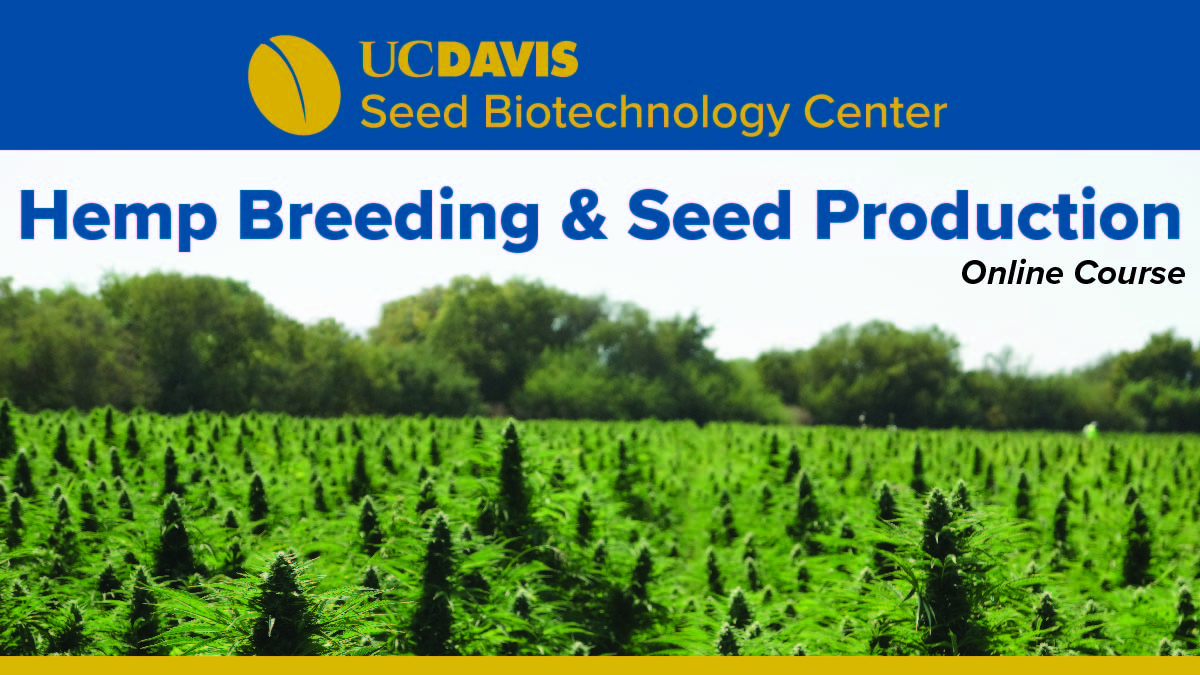 The information below is from a previous course. Course curriculum, dates and pricing are subject to change.

Hemp Breeding and Seed Production (ONLINE) is a 3 half-day course designed to enhance the knowledge of professionals working on hemp improvement and propagation. The course covers hemp seed production topics such as flowering, pollination, seed development, harvesting and certification. Course participants will also learn about hemp genomics, genetics, sex expression, types of cultivars with corresponding breeding schemes and intellectual property protection options. The course will be delivered in an interactive format with lectures and discussions. The instructors include experts from the public and private sectors.

This course is taught by experts from both industry and academia.
This is a great chance to interact with experts in the field!

Kent J. Bradford, Professor, Department of Plant Sciences and the founding Director of the Seed Biotechnology Center, University of California, Davis, CA, USA. His research is focused on the development, maintenance, and expression of seed quality; plant water relations; developmental and growth regulation. He teaches university and extension courses on plant physiology, seed biology, biotechnology, ethics and philosophy of science. Kent received B.S. and M.S. degrees in Biochemistry and Horticulture from Michigan State University and received his Ph.D. in Plant Physiology from UC Davis in 1981.

Brian Campbell is the Plant Breeder for Charlotte’s Web Inc., the market leader for high quality hemp-derived CBD extracts. At Charlotte’s Web, Brian leads the Breeding Team, developing hemp varieties with improved agronomic characteristics and novel phytochemical profiles. He received his PhD from Colorado State University, where he focused on understanding the genetic architecture of quantitative traits and the degree to which phenotypes are affected by environmental factors in industrial hemp. He is passionate about performing applied research that contributes directly to the development of new and improved plant varieties. With a career in Cannabis that spans two decades, Brian has a unique understanding of the biological and genetic mechanisms of the plant, as well as years of practical experience in cultivation, feminized seed production, and breeding.

Chris Holly is a partner at Cooley LLP and helps lead the Agricultural Science patent group, where his practice focuses upon helping clients in the synthetic biology, agriculture, microbiology, biotechnology, and food industries create and leverage robust IP portfolios. Chris has vast experience in helping disruptive startup companies in these sectors carve out valuable IP space, monetize such, and position themselves for acquisition, IPO, or successful commercial launch. Chris obtained a Ph.D. in Biological Sciences from Mississippi State University with research funded by the USDA and focused upon microbial and plant community dynamics in agricultural systems.

Daniel Knauss is a partner at Cooley LLP. His practice focuses on life sciences intellectual property litigation. He counsels clients regarding disputes in a wide variety of technologies areas, including cancer medicines, antiviral therapeutics, biofuels, agriculture, and medical devices. He has been to trial in federal courts, the Patent Trial and Appeal Board, and the International Trade Commission.

Alexander Mkandawire did his undergraduate studies in Agricultural Science at University of Malawi in southern Africa and then pursued graduate programs at Iowa State University (M.S. Agronomy: Crop Production and Physiology) and Michigan State University (Ph.D. Crop and Soil Science) in the 1980’s. Hespent 12 years as an Assistant and Associate Professor of Crop Science at University of Malawi. He came back to the U.S. in 1999 as a Research Scholar in Plant Pathology Department at UC Davis where he was for 5 years. During that time,he studied the Genetic Diversity of Xathomonas campestrispv. phaseoli(Xcp/Xcpf) the pathogen that causes Common Bacterial Blight (CBB) disease on Common Beans using molecular techniques. He then worked briefly as a Researcher at Syngenta Seeds in WoodlandCAwhere he determined rates of infection of Watermelon seed lots by Bacterial Fruit Blotch (Acidovorax citrulli) under grow-out situation using Real-time PCR. He has been with California Crop Improvement Association (CCIA) located at the UC Davis campus for the past 14 years with major responsibilities for conducting field inspections oncertified seed fields ofsunflower, alfalfaandcotton in the past and now small acre crops, the group Hemp belongs to. He is also responsible for conducting Seed Sampler Training Workshops across the state with the Association of American Seed Control Officials’ (AASCO’s) oversight.

Zamir Punja completed a BSc degree in Plant Sciences at the University of BC, and MSc and PhD degrees in plant pathology from the University of California, Davis. He joined Campbell Soup Company and worked jointly with North Carolina State University, Raleigh on carrot diseases. He was Manager of plant biotechnology for Campbell’s until 1989, when he left to join Simon Fraser University in Canada. Zamir’s research investigates the causes and management of plant diseases on vegetable and horticultural crops, and cannabis, and include the applications of plant biotechnology for disease management. His previous work with greenhouse vegetables, ginseng, blueberry and wasabi have led to many research publications. His lab is currently developing methods for identifying and managing new and emerging diseases of cannabis. He is a Fellow of the Canadian Phytopathological Society and the recipient of numerous research and teaching awards. These include the Sterling Prize for Controversy for his work on genetically modified foods and the Synergy Award for university-industry collaborations.

Nicholas Stromberg, Cannabis plant breeder and horticulturalist from Northern California, attended UC Davis receiving a Bachelor’s degree in Environmental Horticulture and a Master’s degree in Horticulture and Agronomy. He has been growing Cannabis since 2006  and  breeding high CBD chemovars since 2012 under California’s Proposition 215. In 2016 Stromberg began growing, selecting, and breeding at acreage scale under Oregonian hemp regulations. In 2019 Stromberg founded Beacon Hemp, an industrial hemp breeding and seed production company specializing in feminized seed, high and rare cannabinoids, day-neutral, and co-product cultivars. In addition to his work in industrial hemp, Stromberg also has worked as a collaborator with Steep Hill Labs in genomic  analyses  method  development and  as Director of Horticulture for several medical and recreational Cannabis companies, including CannaCraft and its affiliates.

John Yoder, Professor, Department of Plant Sciences, and his research team investigate molecular genetic mechanisms governing plant-plant interactions. They are specifically interested in understanding how molecules released by the roots of some plants effect the growth and development of nearby plants and intend to translate these findings into developing crops that are self- weeding. Probably the most robust model for investigating chemical signaling between plants are parasitic plants in the Orobanchaceae because their root parasites use molecules released into the rhizosphere by host roots as chemical cues to initiate the development of invasive haustoria.